If you use a Windows Azure database, you know that you can't easily know its dimension (in term of used space) by the Sql Management Studio, you have to use the Azure Portal. But the portal is not update in real time... So, if you wanna know the database used space, you can use this query:

Instead, if you wanna know the dimension in MB for each table in the Database, use the query below:

Since the "Team Foundation Service" hasn't an administrative console, it's not possible to use it to delete a hosted project.

So to delete a team project from one Team Foundation Service collection you have to use the "tfsdeleteproject.exe" command line tool:

GridView Scroll to a desired group in a Windows Store App

By default, in a Windows Store App, the focus in a GridView is given to the element "0" of the group "0". But what if you wanto to change this behaviour and make it "open" to another element?

To do it, you have to manage the  itemGridView_Loaded event and use the CollectionView:

When you make a Windows Store App, if it uses any Network connection, you have to specify your Privacy Settings in both Store page and Charm Bar.

But how to do it? What's the simplest way?

So, here's the answers.

Do the following in your App.xaml.cs:

2) Add the handler during app initialization (into OnLaunched())

While a lot of information on application development is available on the internet and in books, that information is becoming harder to digest. If you do not enjoy reading several 500+ page books, or scouring the web for relevant blog posts and articles, you have come to the right place.
Syncfusion publishes the Succinctly series concise technical books that target developers working on the Microsoft platform. Each book is around 100 pages and is guaranteed to enlighten you on the topic of interest. Download a copy, get a cup of your favorite beverage, and enjoy!

When configuring SharePoint 2013 in “Complete” mode you get a “The username is invalid. The account mist be a valid domain account” when using a local account to configure the farm… 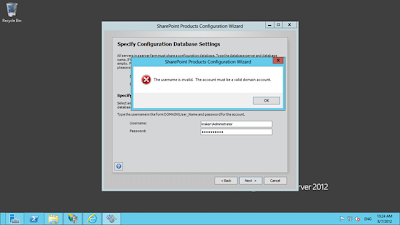 Out of the box SharePoint only supports “Stand-alone” mode for non domain environments, but this forces you to use SQL Server 2008 R2 Express Edition which is most cases is unacceptable.

The solution is to use a PowerShell command to create the initial configuration of the farm with a local account:

1) Start the SharePoint PowerShell (not the "standard" one)

2) Run “New-SPConfigurationDatabase” from the command line and follow the instructions. This will create the farm and configure the necessary accounts. 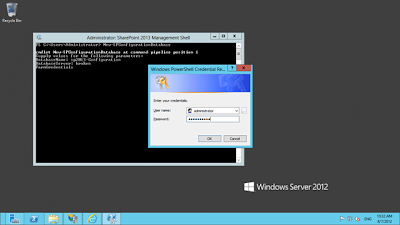 3) Rerun the Configuration wizard. After it finishes start the Config Wizard (interactive or not) and configure your server with all components 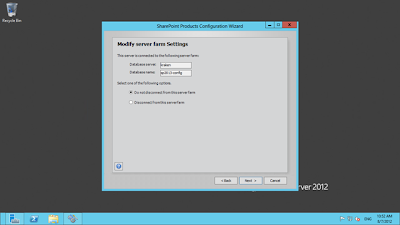 Email ThisBlogThis!Share to TwitterShare to FacebookShare to Pinterest
Etichette: SharePoint

1. Any or Count?
When you have to test for the presence of at least one element into a list, use Instead of That way it only needs to find the first match.

2. Conditions
Use Instead of That way it only does one operation instead of two concatenated operations

3. Understand how it works
You always need to struggle for performance as a LINQ Developer; perhaps because to understand better how internal mechanism works. In above example, you will see in Sql Server Profiler that for each customer one query will be executed additional each times to get the total addresses count for that customer when you enumerates in foreach loop. Now, consider below re-written snippet: Simply in above example, with DataLoadingOptions we are infect just telling LINQ Query engine that while it fetches the Customer data; also fetch associated CustomerAddresses table record count for that particular Customer. The benefit is; only ONE query will be executed to get the final result.

4. Finally
The success behind a LINQ application that you develop lies behind the performance of the query that you formulate. You can use any third party tool like I prefer to use LINQPad (by Joseph Albahari) while my development with LINQ. Actually, quick since a long time after I got to know about this tool and I was impressed so much that I thought to why not I get aware something about such nice and intelligent tool before. Life would have become easier!
Published by Davide a 3/12/2013 12:05:00 PM No comments:


I've started a survey (see on the right side) to know which architectural patter is the best, for you, between MVC, MVP and MVVM.

Use this post to comment the survey or to add notes it you chose the "Other" option.


Assign a default value to a column via  T-SQL scripts is really simple. Its deletion, instead, isn't so simple 'cause of the variable constraint name (in a multi-server environment or on different environments it will never have the same name).

This script retrieve the constraint name and drop it.